ALL President Bill Musk aimed to ‘reflect the enriching effect of languages within the education system’, through plenaries such as The Promotion of Language Learning & Linguistic Diversity at the European Level and workshops such as Reaching New Adult Learners and Reaching the Parts that Languages don’t Normally Reach. 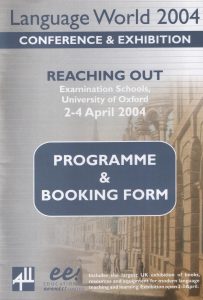 Language World kicked off with an Accreditation Conference with plenaries led by Kate Green, examiner and awarding body officer, and a representative of the European Commission.

Also in April: MPs’ took part in ‘Back to School Day’ to highlight the children across the world who don’t go to school, McFly topped the charts and Magnus Carlsen, the Norweigen chess prodigy, became the world’s youngest international grandmaster aged 13.