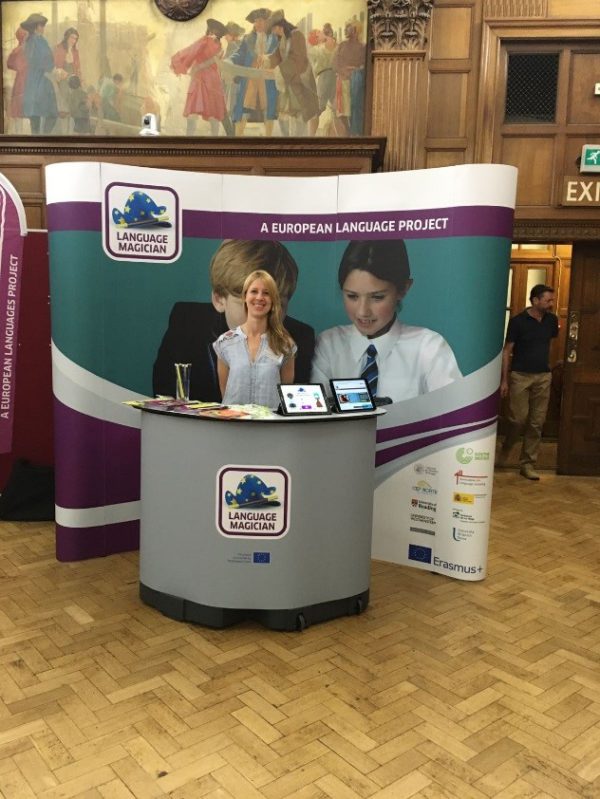 A recap of the aims of The Language Magician:

The Language Magician’s main objective is to develop an online assessment tool for language learning at primary school level, improving language teaching and assessment of linguistic competencies in the primary classroom across Europe.

The first level in English, German, Italian and Spanish has been piloted with over 2000 users trialling it in four countries.  A second round of piloting of level 1 has also taken place and results will be compared from both rounds of testing.

The French version of level 1 will be tested in the autumn.

The game’s Level 2 has been tested recently in Vienna. In September, the game will be piloted with at least 3 classes for each language trying out the levels.  Any necessary changes will be made by December.

The Language Magician  – come and try it out!

The Language Magician will be showcased at Language Show Live (13-15 October 2017).  Project partners will share the benefits of the Language Magician in a Friday seminar from 15.15-16.15.  There will also be an opportunity to have a go at using the game at the Primary Languages Base.

The Language Magician will be launched officially at Language World (23-24 March 2018).  Among a variety of activities, there will be a Major Talk on Friday 23 March 2018 and training sessions for Primary Hub leaders on the use of the game so that they can spread the word in the local areas.  Teachers can explore and have a go at the game during the conference.

Could it be magic?

Read Steven Fawke’s article on how The Language Magician can support the teaching of languages in the UK’s primary sector.

Have a go at the demo version of the game here.

Watch a trailer of the game

Be inspired by The Language Magician trailer.